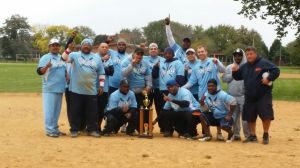 Our hats also go out to the team from 52nd Street who played hard all the way to the end and forced a second game to decide the championship.

Mayfair took the final championship gave by a score of 13 to 2.

We would like to thank all of the teams and fans who came out for the 2015 season and hope to see everyone out here next year.